Why aren’t multiplayer-only shooters catching on?

There's been a worrying trend among shooters recently, where it is announced that a promising new game will be multiplayer-only. The game will launch with great hype and then... the community for the game just sort of dies very shortly after. This has happened for games like Evolve and Titanfall, and seems to be happening to the recently released Star Wars: Battlefront. The common thought in the online gaming community seems to be that these games are failing to create lasting communities because of two things: Undesirable pricing models and/or a lack of single player campaigns. The point of this article is to debunk both of these myths, instead proving that flaws in the inherent design of these games are what cause their communities to disperse after a short time period.

Starting chronologically, lets discuss Titanfall. The award-winning makers of the most successful FPS franchise ever go on to create a new IP featuring badass mech suits and jetpack parkour. Sounds awesome right? Well, the thing is... it actually is awesome... for a while. Titanfall's shortcomings are difficult to pin down because its design flaws are more subtle than Evolve's or Battlefront's. After much thought on the subject though, I'm convinced that Titanfall fails to create truly a sticky, long-lasting gameplay formula because of its gameplay flow, specifically the pacing.

What do I mean by flow? In 1975, Hungarian psychologist Mihaly Csikszentmihalyi (say that three times fast!) defined the term as "the feeling of complete and energized focus in an activity, with a high level of enjoyment and fulfillment". Otherwise known as "the zone", you've probably experienced this phenomenon when playing at your highest level in a game you really enjoy. Leading game academics have co-opted Csikszentmihalyi's theories on flow to create better games, creating what is known as the "flow zone" (flow channel in the picture below).

An interesting concept of the "flow zone", as expanded upon by Jenova Chen, lead designer of Flow (!), Flower, and Journey, is that the "flow zone" actually oscillates on its way up. Looking at the image below, we can see that players ideally desire periods of down and up time in their game experiences as their challenges and skill increase. This brings me back to the issue of pacing in Titanfall. Certain design choices, notably the decision to stuff the map with AI "creeps" to farm, create a game experience that is all action, all the time. While this sounds cool on paper, or in a trailer, or even on your first few playthroughs, eventually the pacing of the game will wear you down. As seen on the first chart on flow, too much gameplay stimulation can cause anxiety or fatigue. The best action movies have quieter scenes to make the action scenes hit harder when they roll around. Games are no different.

A big part of what made the original Modern Warfare's multiplayer such a success was the concept of kill streaks and the pacing they brought to a multiplayer match. You started off with balls-to-the-wall action and then got a killstreak. All of a sudden, one of two things happened - you used the killstreak, which brought you temporarily into a new mini-game, thus breaking up the flow of the game. Or, you tried to rack up more kills to unlock a further killstreak, playing conservatively and cautiously. Both of these strategies caused a break in the main action, potentially slowing down the gameplay and forcing interesting decisions onto players - exactly what defines good flow. This concept of flow explains why players of Titanfall eventually felt fatigue from playing, and eventually quit.

To be completely honest, I haven't played Evolve. However, from watching game footage and talking to several people who have owned it, I think it's safe to say that the game's problems are much more pronounced than Titanfall's. So while I haven't played it, I feel comfortable analyzing it. Much of Evolve's launch hype was tainted by the egregious DLC model that was announced. Many people cite the hardcore gaming community's problem with this model as a large reason for why Evolve failed to secure a community, but I think its design issues raise far bigger flags.

First of all, Evolve's daring, asymmetrical design makes it a tricky game to balance. The monster player's optimal strategy was to dully farm the neutral beasts for experience, while avoiding the other players. Meanwhile players want to kill the monster as quickly as possible, leading to a conflict of optimal strategies. Essentially, matches are usually underwhelming, where either the players catch the monster too early and the fight is anticlimactic, or boring while the monster farms all game and mows down the players with ease at the end. Neither option is ideal, and as a result, close, exciting matches are a rarity.

Another issue with Evolve's gameplay revolves around its high standards for team play. Good teamwork is essential in catching the monster before it grows too powerful. Throwing four random players together doesn't often work, due to the game's lack of tools with which to enforce cooperation. Certain games, like good MOBAs or MMO's, force random teams to more-or-less play cooperatively through rigidly designed roles that naturally synergize. While containing classes, Evolve's class design seems to lack this natural synergy, leading to frustration when one player is not in sync with his teammates. Often, this causes one or more players to leave the match early, ruining the game for everyone else. 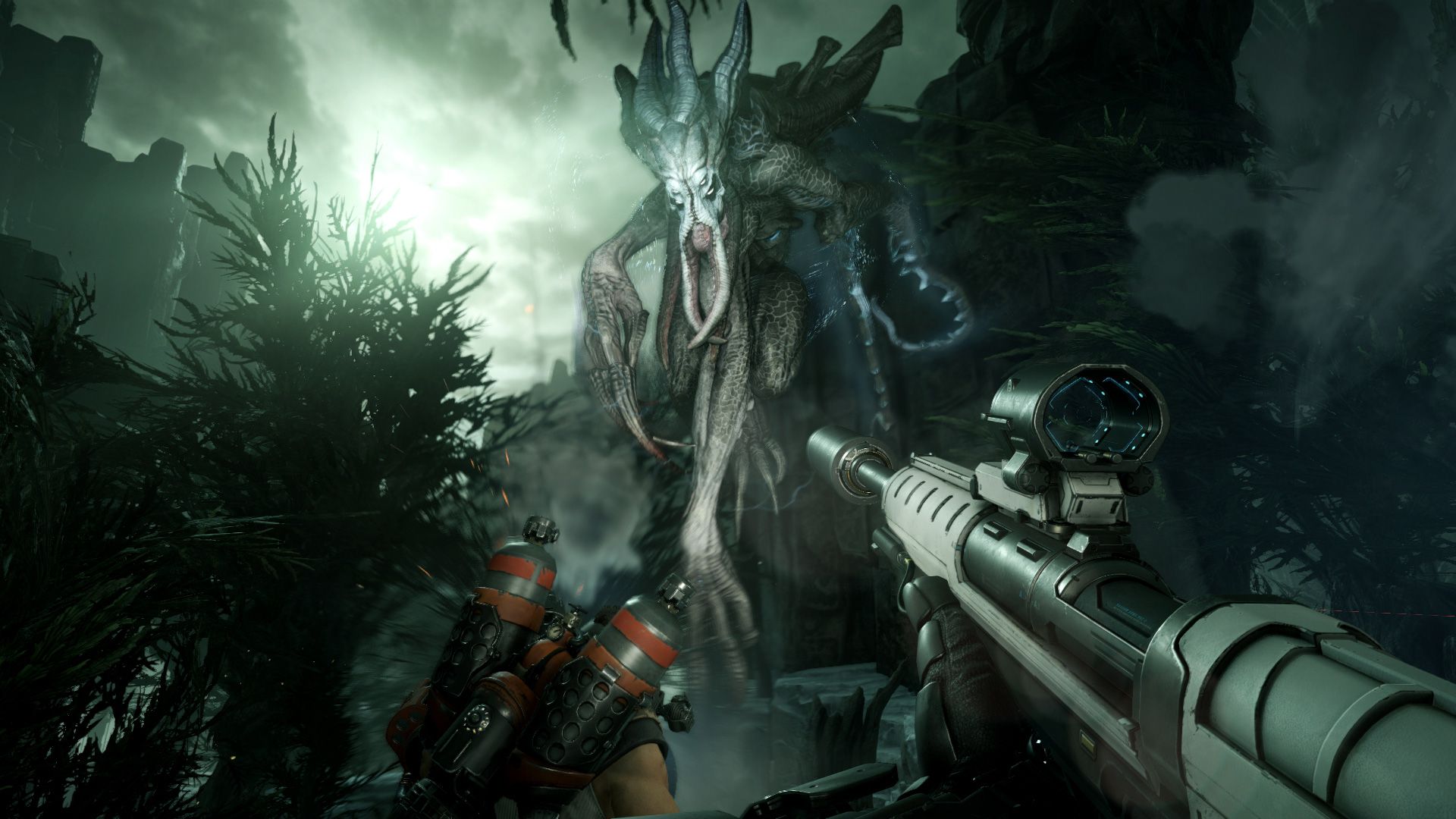 Many of Evolve's players have said that the game can be incredibly rewarding and unique when all of the moving pieces line up well, but the reality is that a good match is an exception from the norm. Evolve's players tend to leave the game after coming to this realization.

I'm going to be fairly brief when discussing Battlefront, because I think that this game's issues are more glaring and better documented than the previous two games. While I defended Battlefront from its criticisms  in one of my previous posts, you may have noticed that I never disagreed with observations about the game's lack of depth. It is a shallow game with a low barrier of entry and there is nothing inherently wrong with that! Not every multiplayer shooter can and should aspire to be Counter Strike. However, we've seen its player base die off already, which is worrisome for what many consider to be a fun experience.

The bottom line is that, if we look at the graph for Csikszentmihalyi's flow again, we see that the two axes on the graph are player skill and then challenge. Optimal flow lies in the middle. Naturally, player skill increases as they spend time mastering a game's mechanics, so it is up to the game to increase the challenge as the player gets better. So when you have a game that is relatively easy to master, players, especially hardcore ones, leave the flow state relatively quickly as they drop into boredom. This is precisely why we see Battlefront's player base falling away at the moment. Smart game design, particularly multiplayer design, allows players to have fun at a low skill level, but also have room to enjoy other things that require time to master.

To conclude, we see that these three multiplayer-only shooters failing for entirely unique reasons, all related to their inherent design. Same symptoms, different diseases. I think that most people are quick to assign blame to their "multiplayer-only" component because they're actually good games. Maybe not great games, but they don't have any hugely glaring faults (with the exception of maybe Battlefront). It's hard to analyze why something isn't catching on if you played it for 20 hours and enjoyed yourself. I definitely think there is potential for modern multiplayer-only shooters to find and captivate large communities. Take a look at Rainbow Six: Siege right now. Despite having a rough launch with technical issues, its community is still very active on Twitch and other sites. Siege, while not without problems, seems to have a combination of solid pacing, built-in teamplay dynamics, and a decently high skillcap. See a pattern here? Perhaps Siege's continued success will be a model for the design of future multiplayer-only shooters.

Edit: A number of users have pointed out that Csikszentmihalyi is actually Hungarian, not Russian. I apologize for this inaccuracy and I'll do my best to fact check more thoroughly in future articles. Thanks for the correction guys!

12 responses to “Why aren’t multiplayer-only shooters catching on?”